Manna for the Morning

Preston and Sandie have been very happily married for over 36 years and enjoy their life to the fullest! They have raised two outstanding daughters, Christie and Jennifer. Both are married to outstanding Christian men. They are also grandparents to three active boys and a very cute little girl! 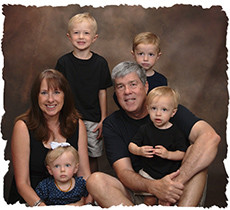 Preston graduated from Texas Tech University in 1977 with a degree in Finance. He worked as a Corporate Financial Planner with Texas Instruments for several years before getting his Master's Degree in Biblical Studies from Pepperdine University. Preston and Sandie served in the ministry for 23 years. They have lived all over the United States...from Texas to Massachusetts to California to Oklahoma and Washington and in the Philippines and Japan, too!

In 1991, Preston was leading a large congregation in San Francisco and wanted his church to read through the Bible in a year. Preston went to numerous Christian Bookstores and looked for material to help guide the members of his church in their reading. Most of the booklets were very inadequate and shallow. Preston decided to undertake the project of writing simple commentary that would give the readers daily insights from the assigned scripture reading of the day.

They also both served as Vice Presidents of the Asian Region of HOPE worldwide, an international charity organization. Their specific responsibility for HOPEww was overseeing the benevolent work in twelve SE Asian countries.

They currently have their own successful Real Estate company in the Denver, Colorado area where they serve as Brokers. Both are very involved in Christian teaching and they continue to visit foreign mission spots regularly. 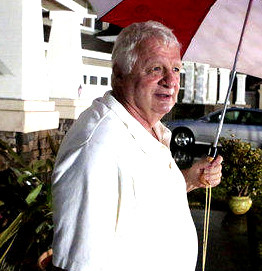 Ed was called to teach in California at the Napa Valley Christian School in 1977.  A year later, he married the principal Edith Jane Williams (smile).  They had their first child: Timothy Edward Heinlein. The joy of a first child was second only to their coming to Christ!  Timothy has a Law Degree from UCLA and is a Senior Counsel for the Treasury Department.

Ed and Edie then became the founders and principals of six Christian Schools they started in the next several years.  Each school had enrollments that numbered from 100 to 350 students in the first year!  Their God-blessed success has been unparalleled in the history of Christian Education.

They had three more precious children in these early years:  Amanda (a Mastered Teacher), Christina (a published Cal Poly Geologist) and David (an All-Around “Gracious” Computer Person).  Ed and Edie describe their children as being compassionate, loving servants of the people they meet in life:  Luke 10:27.

The Heinleins seek to make The Inheritance Story of the Bible “The Way” and “The Story” of how they live the remainder of their lives (1 Pet. 4:1-2)!  They are setting a website to offer their Bible materials and to build unity for all who teach and seek maturity in Christ as they walk in The Way!

Rudy Gonzalez was born and raised in the Metro Manila area.  He attended Far Eastern University and has been involved professionally as an artist his entire life.  Currently he and his wife Susan and family live in Parañaque.  Rudy painted all twelve of the cover designs for each of the Manna books.

Although his remarkable talent was evident, his inclination in the arts came as no surprise as Rudolf is part of a long lineage of gifted visual artists.  Gonzalez says of his family, “My grandfather is an artist, my dad is also a celebrated artist, my uncle, my auntie, my brothers, and my cousins are all artists, all over the world.”

His blossoming artistic career has taken him all over the world as he attended art expos in Chicago and L.A., receiving equal billing with foreign artists whose works he once admired from afar. Galleries in Florida, South Carolina, California, Hawaii, and even Japan have clamored to buy his paintings, and he exhibited all over the world to rave reviews. 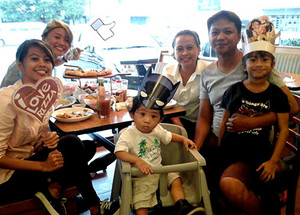 Reymundo and his wife Grace live in the Philippines.  Reymund Cuevas was born in Candelaria Quezon Province south of Manila in 1971. Growing up he was heavily influenced by his father's artistic talents and of Japanese manga anime Voltes V. During childhood he got a chance to exhibit his sketching and coloring skills as a school artist representative to a poster making contest and won first place. And that ignited his inspiration to follow his love.

He Took Marine Transportation in college but pursued fine Arts instead which is close to his heart. Studied photography, pastel and charcoal portraiture part time in college and took many job order for free to be able to practice often and carefully hone in his crafts. Oil, Acrylic, Pen and Ink watercolor, pencil rendering and caricature is included in his arsenal in the trade. He got married in 1994 and now have three girls and a boy. He got a chance to work with southeast Asian NGO's such as IIRR and made series of books with multinational writers and desktop artist. Worked in Saudi Arabia for two years as a photographer and caricature artist as well in 2003 - 2005 but dreams of working at home with his family.

Now he now works online and self studies on 3d visualization and motion graphics. Of all the media he studied it's oil painting that he loved the most, He believes that oil painting last centuries and would be a great legacy in good hands. Second is his newfound emerging multimedia is 3d Visualization and modeling. His lifelong dream is passing all his artistic talents to his kids and most importantly his love for God Almighty.

MANNA FOR THE MORNING™